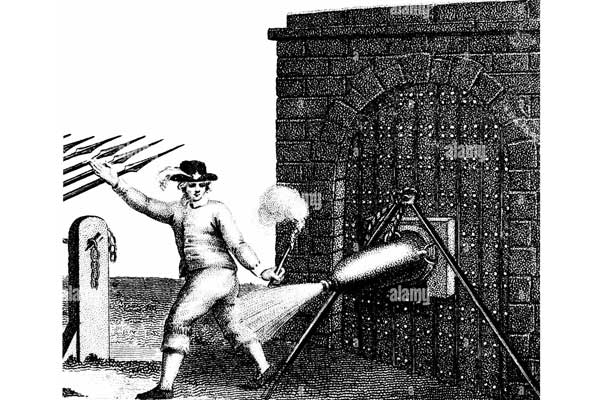 画像引用：Normal method of applying a petard (explosive device) to the gate of a fortress. The fuse has just been lit and the Fusilier is retreating quickly in order not to be ‘hoist
https://c8.alamy.com/comp/D95M42/normal-method-of-applying-a-petard-explosive-device-to-the-gate-of-D95M42.jpg

George Bernard Shaw was an intellectual person well known for his harsh criticism and sharp tongue.  A rare incident happened one day that he placed himself in the situation of “hoist by his own petard”.

The scene was at his home.  He had conceived a contention that male judgment was superior to female judgment.  He wanted to reassure himself of its righteousness before making it public, and asked Mrs. Shaw for her support.

Mrs. Shaw’s first word sounded like a total support of his contention.  But her second word implied that under the contention, he would have to admit that although his marrying Mrs. Shaw was the result of his right judgment, Mrs. Shaw’s marrying him was the result of her cursory decision based on her poor judgment, that is, he could have been only one of the men for her when they married.  George Bernard Shaw tried to fortify his contention by getting a support from Mrs. Shaw, but instead, got pointed it out in her ironical way, that such a contention would place himself in an unfavorable situation for him.