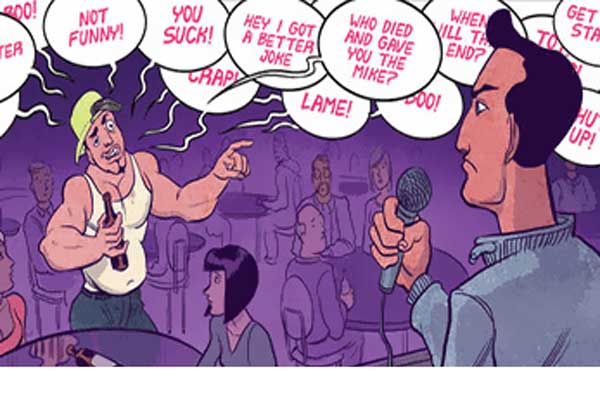 When the star in a London production of Shakespeare’s Hamlet became ill, no one was available to replace him except an American actor.  He was known in the production by his poor acting ability as opposed to what he was bragging about himself, but they had no choice and decided to use him as an understudy.

Sure enough, his poor acting stirred up groans among the discerning British audience, but the American actor, oblivious to the groans, went ahead.

Then came the famous soliloquy: “To be or not to be …”  Generations of Hamlet actors had put a lot of thought into this part, and had captured the heart of audience.  As it was, the British audience, who usually pride themselves as ladies and gentlemen, could no longer stand it, and everyone cried, “You stink!”, “Go home!”, “Give me my money back!”, making the whole theater full of booing.  At this point, the American actor stopped and bellowed: “Hey, don’t blame me.  I didn’t write this junk!”

The egotistical American actor was not aware that the booing was against his acting.  He thought that it was against the soliloquy itself.  He had never read playbooks by Shakespeare, so Hamlet written on his script was his first encounter with this play.  Naturally, he hadn’t understood what the soliloquy meant, and he just read it as it was written on the script.  Facing the booing from the audience, he shouted back to them, “You have right to blame this soliloquy which doesn’t make any sense.  But I didn’t write this junk.  I’m just doing what is written on the script. “, or words to the effect, meaning who was to blame was Shakespeare the writer, not him.