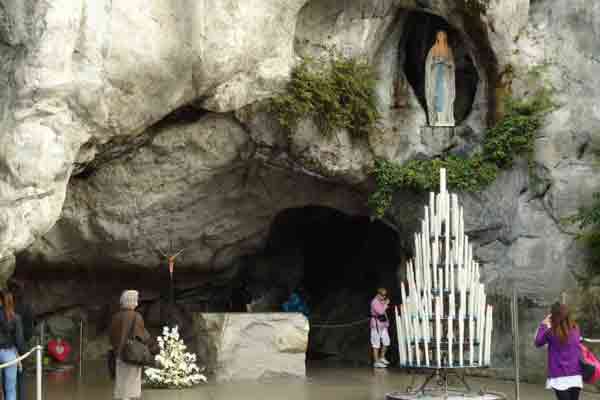 画像引用：Miracles in Lourdes ? Does God Prefer the French? ? Tootlafrance
http://www.tootlafrance.ie/wp-content/uploads/bfi_thumb/Lourdes-Grotto-800×533-mzt8ysj1zvuyykv52akz2971i8hlew9t7ddkdwo3pu.jpg

In Sunday school, the minister was trying to explain the word miracle using an example.  He knew many world-famous examples of miracles since ancient times, but he intended to use something the children would feel familiar with, like an event which happened around himself.  “Boys and girls,” he said, “suppose I stood on the roof of a ten-story building, lost my balance and fell off.  Then all of a sudden, in midair, a whirlwind swept me up and brought me safely to the ground.  Now what word would you use to describe this?”  A boy volunteered, “Luck?”

“True, true, but luck is not the word I wanted.  I’ll repeat the story.  Listen carefully,” said the minister, and repeated the same story that he fell from the top of the building, then all of a sudden a whirlwind caught him in midair, and placed him on the ground.  “Accident,” came from a girl.

Taken aback by this degenerated answer, the minister said, “No, no.  Listen carefully,” and repeated his story.  This time, the boys and girls shouted in unison, “Practice!”

The boys and girls were so bored with the same story the minister gave them three times.  The right word for the minister’s repeated action, it’s none but practice, everyone thought.  So, the boys girls shouted, “Practice!”  If the minister had used one of the common examples like Moses parting the Red Sea during the Exodus, or St. Peter enabling a lame person to walk home by only touching him, the boys and girls wouldn’t have been confused.