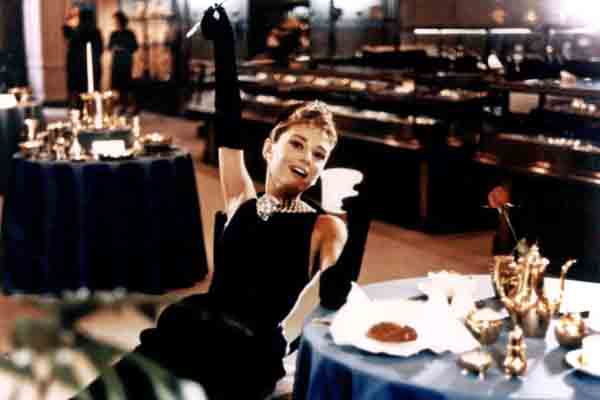 画像引用：You Can’t Have Breakfast at Tiffany’s | The New Yorker
https://media.newyorker.com/photos/5a0de86432e52953cc4d2a9e/master/w_727,c_limit/Goldfield-You-Cant-Have-Breakfast-at-Tiffanys.jpg

In the middle of a shopping spree she had been engaged in for hours, the wife realized that her husband was nowhere to be seen.  “Where are you!” she yelled on her cell phone.

Then she heard his sweet voice.  “Darling,” he said, “do you remember that jewelry shop, the one where you saw that diamond necklace you loved?  But I didn’t have enough money at the time, so I said, ‘Baby, it’ll be yours one day’?”

How could she forget?  The glitter of the diamond on that necklace had been branded in her memory, and it wouldn’t go away.  Her husband had surely said that he would get her the necklace someday, but she had thought he was just buying time, and must have forgotten about it by now.  But she had underestimated him.  He hadn’t forgotten, saving money for what he had promised, until today that he had saved for a surprise present for her.  She said excitedly, “Yes, I’m coming!”  Then she heard him say, “Well, I’m in the bar next door.”

Obviously, she had overestimated him.  He was far from giving her a surprise present.  Conversely, he had retreated from the shopping with her, drinking by himself at the bar.  He remembered the incident at the jewelry store at least to be able to guide her to where he was, but not well enough to refresh his resolve he had at that time, even for a second, to please her by getting her the necklace.