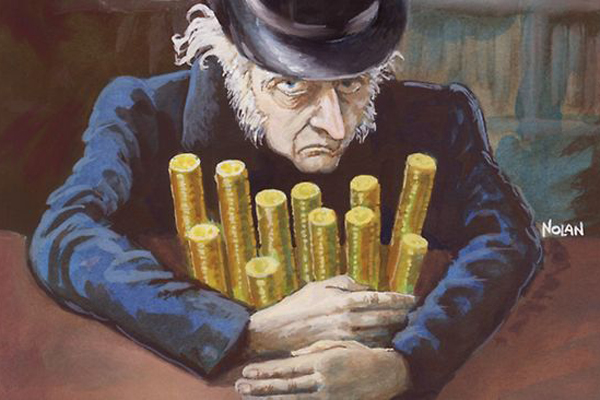 A very thrifty man was on his deathbed. His family gathered round to share his final moments.

He called out to each of his family members one by one, and each member replied respectively.

Assured that they were all there, the old man opened his mouth to speak. The family members all shared the same thought.  “We are finally going to hear his warm and considerate words for the first time, after hearing only scolding about saving for as long as we remember.  I, too, will say something considerate wishing him to leave this world in peace.”  But their expectations were betrayed.  They heard the old man scolding them as usual, “So if you’re all here, why is the light on in the kitchen?”

The old man’s habit of frugality was still intact even when his life was almost over. His eyesight had gotten so weak that he couldn’t see where his family members were.  But, the light in the kitchen was still visible.  He had called out to each family member to see if anyone was in the kitchen, and confirmed that everyone was around him.  Then, he was sure, no one was in the kitchen.  Turning off the lights of an empty room was the first step of saving which his parents had instilled in him when he was a child, and he had done the same in his family members.  For him, scolding his family about saving until his final moments took precedence over saying something considerate to them in his final moments.