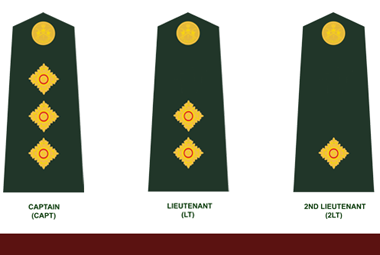 Private Jones was a pain in the neck for his lieutenant. It was because Jones found subjects for bets at every opportunity, and furthermore, he invariably won the bets.  As a result, he was giving demoralizing influence to his unit.  The lieutenant, after trying unsuccessfully to end his gambling, sent him before the captain.  He hoped that Private Jones would be intimidated by the captain.

After the interview with Jones, the captain summoned the lieutenant, and assured him that the problem had been solved. According to the captain, Jones couldn’t stop betting because it was a habit he couldn’t think he would lose.  “Jones challenged”, the captain explained, “he’d bet me $10 then and there that I had a mole on my left shoulder.  Well, I knew darn well I didn’t, so I accepted the bet.  Then I took off my shirt and showed him.  He admitted he had lost and paid the $10.”  “I guess that’ll hold him!” concluded the captain.

The lieutenant, contrary to the captain’s expectation that he would show an expression of relief to hear the captain’s explanation, remained silent. Asked why, he related his side of the story.  “You see, on the way to your quarters Jones bet me $25 he’d have the shirt off your back in five minutes.  I thought it was a thousand to one in my favor, so I accepted his bet.”