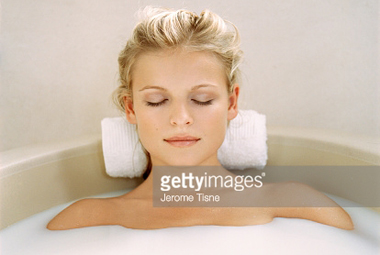 When Sally O’Malley of County Clare won the Irish Sweepstakes, she decided to spend the money on some extravagant things.  Although she had been longing for living rich since childhood, she had had no idea what the rich life actually was like.  So, when she suddenly became capable of spending money lavishly, she couldn’t think of the things to spend it on.

Then she remembered that she had heard that the actresses in Hollywood were taking milk baths.  “Oh, yeah, this is it!  I’ll try a milk bath,” she decided to make it the first step of her extravagance.  So one morning she told her milkman to bring her 96 quarts of milk the next morning for her milk bath.

“Whatever you say, ma’am,” answered the milkman, and he was sensible enough to consider that that much of milk would need pasteurization to protect it from going rotten.  So he offered, “Will that be pasteurized?”

Sally couldn’t make out what he said.  It was not because of his terrible Irish accent.  She spoke the same language, anyway.  She simply didn’t know such a difficult word as “pasteurized”.  Milk for her meant the raw milk fresh from ranches which she was having delivered every day.  So she mistakenly assumed that the word she couldn’t catch was “baptized”, and that what the milkman asked her was something like, “Will that be as baptized?”  The baptism in her religion was the total immersion in which the whole body of the person was submerged in water.  The image of herself submerged in milk up to her head in the bathtub flashed in her mind.  She hastily replied, ” No, not that much.  Up to my chest will do.”