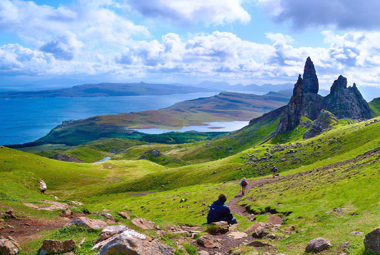 画像引用：Pictures That Will Make You Want To Visit Scotland
http://static4.businessinsider.com/image/54131c296da811d10f0793bb/23-pictures-that-will-make-you-want-to-visit-scotland.jpg

An Englishman, an Irishman and a Scot were drinking beer at a pub. They each found a fly swimming around in his beer.

The Englishman asked the bartender for a napkin and a teaspoon. Elegantly scooping the fly out, he placed it in the napkin and delicately folded it.

The Irishman didn’t have the sensitive mind as the Englishman. He pushed his sleeve up, immersed his hand in the beer, caught the fly, threw it on the floor, and stepped on it.

From the Scot’s point of view, their acts were nothing but a waste of the precious beer. He was determined to cope with this situation with minute attention. He took his jacket off, draped it neatly over the chair, folded his shirtsleeves up, and bent over his pint. Carefully he fished the fly out by picking it up by its wings. He lifted it just above the mug, shook the fly to drop the beer off it.

What he did next was a result of just a common process of thinking of any Scot, but was quite uncommon among other nationals. When he was sure that every beer on the fly’s surface had dropped into the mug, in a threatening voice he bellowed, “Now spit it out! All of it!”

The Scot couldn’t stand that his beer was wasted by a fly. So he exerted all his powers, first to retrieve all the beer stuck on the surface of the fly, then to do the same from inside of it.

(The Scots who appear in jokes seem to be regarded as the stingiest national in the world.)