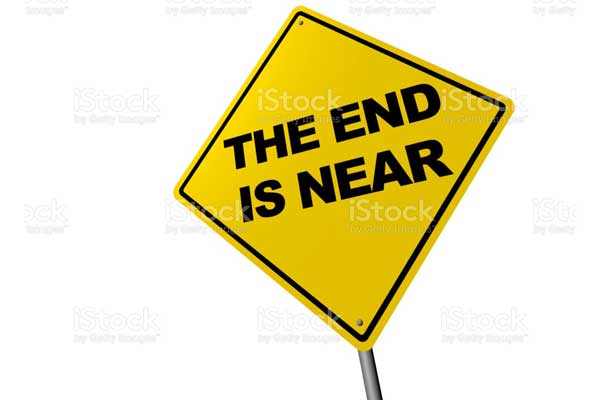 A man was driving a car on a country road when he came upon a priest and a rabbi standing on the shoulder of the road.  They were fishing.

Next to them was a sign that read “Turn Around.  The End Is Near.”  The motorist was familiar with those phrases.  They are commonly seen around preachers when they preach on the street.  They would preach, “Think about what you have done in the past.  The end of the world is approaching.”  The motorist, who had been solicited on the street by preachers many times before and had come to be fed up with it, rolled down the window and yelled, “Mind your own business!”, and kept going.

A few seconds later the two fishermen heard tires screech, then an inevitable splash.  The rabbi turned to the priest and said, “I told you we should’ve just written, ‘Bridge Out.’ “

The priest and the rabbi didn’t post the sign to preach there.  They had come there to enjoy fishing, and had found that the bridge had been swept away.  So they posted a signboard and wrote, “Turn around.  The end is near.”, meaning, “Turn back.  You are approaching the end of the road.”  But the phrases were the same as those they usually use when they peach.  Besides, both the priest and the rabbi standing together gave the impression to the motorist that they were prepared to preach anyone, Christians or Jewish people.  So, it never crossed the mind of the motorist that the sign literally meant that the road was coming to an end, and he kept going until it was too late.