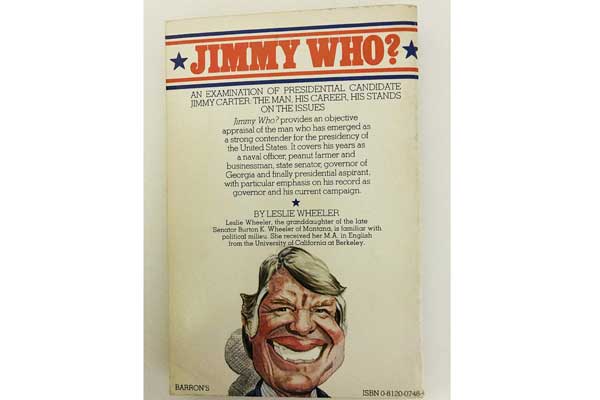 How was Vice President Mondale chosen by President Carter as his running mate out of four candidates for the presidential election?  It was decided as a result of what they did, or did not do, when they were invited, one by one, to Carter’s home in Plains, Georgia.

The first to go was John Glenn.  He tried to please Carter, who was a peanut farmer, and said, “Jimmy, I’m anxious to see those trees your peanuts grow on.”  He didn’t know that peanuts were grown underground, not on trees like walnuts.  His remark gave an impression to Carter that he was a person who talks about something he really doesn’t know.  He dropped him from the candidate’s list.

Then Ed Muskie dropped in and said, “Jimmy, I’m really anxious to have some of those blue-eyed peas for dinner.”  He was trying to impress Carter by quoting a phrase from  “Bring Back My Blue-Eyed Boy to Me”, one of the masterpieces of “The Carter Family”, the family members who were well known as the creator of modern music in the beginning of the twentieth century.  He had mistakenly thought that Carter was from the clan of The Carter Family, which was not uncommon among many people, because back then Jimmy Carter was not well known nationally until articles entitled “Jimmy, Who?” circulated describing Carter when the Presidential election officially started later.  Carter took his remark as a lack of effort to know more about him than average people did, and dismissed him from the candidate’s list.

Then Frank Church came and said, “Jimmy, I’m the first guy in my family to come to Plains since my great-uncle General Sherman passed through 100 years ago.”  For the people who won the war, the Civil War was only a part of history, but in the south, there were people still holding a grudge about the war.  Still worse, it was General Sherman who burned down Atlanta, the state capital of Georgia.  Carter decided that with this man who nonchalantly talks about the Civil War in the center of the Deep South, they would not touch a favorable chord with people including southerners, and dismissed him from the candidate’s list.

When Mondale came, Rosalyn Carter, who had witnessed with her husband what had happened before him, said, “Don’t try to say something fancy, Mondale.  Just keep your mouth shut, and the job’s yours.”  It was because Mondale followed her advice, and said nothing out of line on that day that he was able to run and win the election with Carter, and remain in the center of the Democratic Party fulfilling his duties like Vice President, ambassador to Japan, and so forth, until he passed away on April 19, 2021.