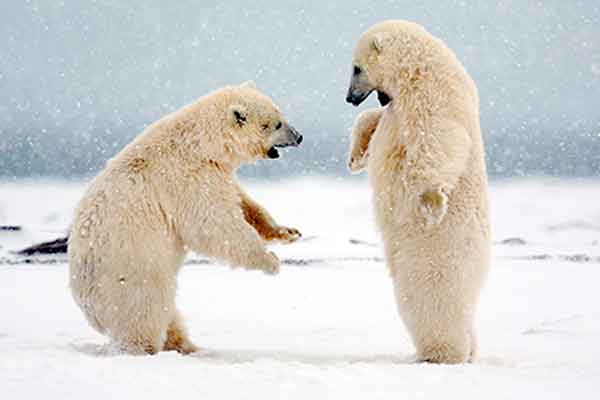 A Texan who had lived his life bragging about everything, just as other Texans did, realized one day that Texas was not the largest state in the US, but Alaska was, and he had been brooding over it ever since then.

He finally made up his mind, and went to Alaska.  He intended to become an Alaskan, and brag more than when he was in Texas without feeling inferior as to the size of the state he lived in.  At the Last Chance Saloon, he asked the bartender, “How do I get to be an Alaskan?”  The bartender, tempted to have a little fun, replied, “Friend, you can’t be a full-blooded Alaskan until you’ve downed a pint of whiskey in one gulp, danced with an Eskimo and shot a polar bear.”  “It’s a piece of cake,” said the Texan, and ordered the pint of whiskey.  He got it down in one gulp, and lurched from the saloon.

The bartender and the customers at the scene, anxious to see what would happen, waited until almost midnight, when the Texan stumbled through the doors all scratched and ripped and bloody.  “Okay,” he said, “okay, I’m gonna be an Alaskan.  Now where’s the Eskimo I’m supposed to shoot?

The Texan, under the influence of a pint of whiskey, got mixed up with a polar bear and an Eskimo; that was, he thought he had to dance with a polar bear and shoot an Eskimo.  He found a polar bear, and attempted to dance with it.  After struggling with the angry beast, he barely made it to safety, and looked for an Eskimo as the next target.  But, fortunately for him and the Eskimo people in the area, he couldn’t find one.  So he returned to the saloon, and asked where he could find an Eskimo.