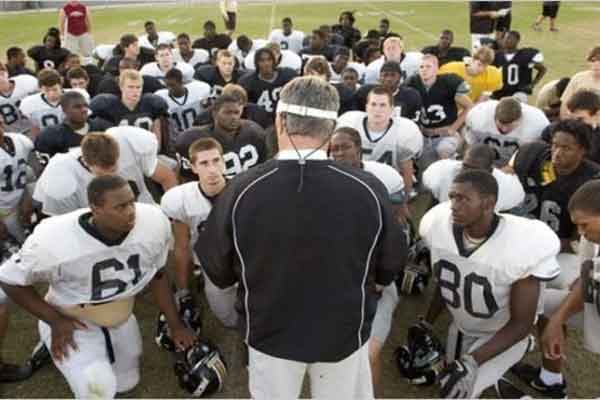 “Okay, men,” said the football coach at the end of a practice session.  “There’s one more formation I want to teach you.  It’s pretty simple — everybody just form a circle around me.”

The players gathered around him.  “Now start running toward the field house,” he ordered.  Perplexed at the new formation they had never heard of, one of the players exclaimed, “Coach, when will we need a formation like this?”

“If things go as I suspect,” replied the coach, “it’ll be needed after every game — to get me past the alumni.”

The coach was horrified at the terrible performance of his players.  It was obvious that they would be beaten by any other team.  This college football team was once known as a powerhouse team.  What if the alumni saw the pathetic performance of this team?  The coach could almost hear them yelling at him, “You bastard!  What did you do to our glorious team!”, and picture himself beaten up by their still powerful arms.  The amazing solution he devised was the formation which would protect himself using the players as a shield against the wrath of the alumni.