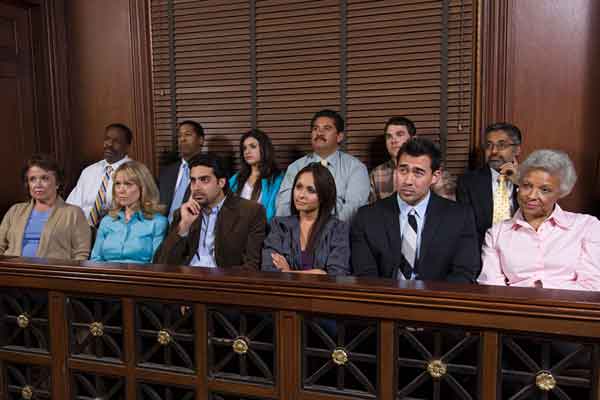 画像引用：How Is a Jury Selected in a Case Where the Evidence Is Especially …
https://www.independent.mk/wp-content/uploads/2018/09/jury.jpg

The lawyer of the murder trial kept losing, so he came up with a trick as a last resort.  “Ladies and gentlemen of the jury,” he said, “I have a surprise for you.  In one minute, the real murderer will walk into this courtroom.”

Stunned, the jurors looked toward the door, but no one came into the courtroom.  Satisfied with the reaction of the jurors, the lawyer said, “I lied.  But because you all looked with anticipation, that proves there is reasonable doubt as to my client’s guilt, and I insist that you find him not guilty.”

The jury retired to deliberate, then returned a verdict of guilty.

“But you must have had some doubt,” bellowed the lawyer.  “You all stared at the door.”

The lawyer had expected that by giving the jury a reasonable doubt, however small it may be, as to the guilt of his client who looked guilty to everyone including the lawyer himself, he would manage to win.  His tactics after planting a doubt were that he would first insist on the principle, “giving him the benefit of the doubt”, preventing the verdict of guilty.  Once this was established, the rest would be easy.  He would then argue passionately based on the principle of the presumption of innocence, “innocent until proven guilty”.  As a result, his client the murderer would walk away a free man, wouldn’t he?  But his tactics had a hole in them.  His client, who was well aware that he was the murderer, did not expect the real murderer to come into the courtroom, and did not look toward the door.  The jurors all looked toward the door, but they didn’t fail to observe that the defendant did not look toward the door.