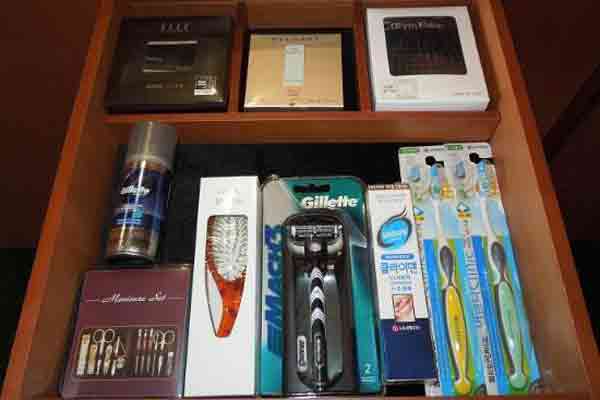 画像引用：Notice! These amenity goods are not free!! – Picture of …
https://media-cdn.tripadvisor.com/media/photo-s/02/59/dc/95/notice-these-amenity.jpg

We were lucky to hear in time that the Piedmont Hotel in Atlanta was getting renovated and its beautiful doors made of maple wood were available for sale as salvage items.  The Piedmont Hotel was a prestigious hotel, where important people such as President Roosevelt never missed staying when they came to Atlanta.

We bought several and had them installed in our home, which was a 19th century home.  We never showed it off, but deep down we were proud of it.

We invited a friend, and showed him around our house.  I pointed out, “You know, many of these doors are from the Piedmont Hotel.”  Contrary to my expectation of his surprise and praise, he looked stunned and said, “Most people just take towels.”.

He knew that many people would take home hotel equipment as a reminder of staying there.  It was usually a small item of amenities like a toothbrush or a bar of soap, taken almost openly in this case, or a little bulkier one like a towel, done rather secretly with some guilty conscience.  In any case, he was not expecting anything larger than a towel.  When he heard that the doors originally belonged to the hotel, he thought that we had surreptitiously taken them from the hotel.