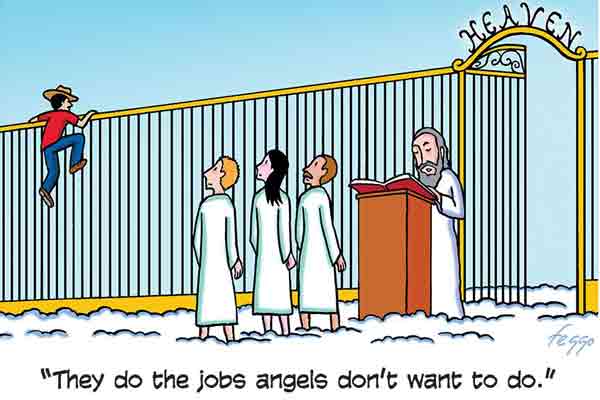 A preacher died and went to heaven.  The inhabitants there were, he found, ranked as on the earth, even more strictly so, and they were placed on the districts corresponding to their ranks.  He noticed that a cab driver he knew had been given a higher place than he had.  He complained to St. Peter, “I devoted my entire life to my congregation.  Why is it that I’m ranked lower than that cab driver?”

“Our policy is to reward results,” explained St. Peter.  “Now what happened, Reverend, whenever you gave a sermon?”  What flashed in the priest’s mind was the people falling asleep during his sermon at every congregation he presided.

St, Peter, reading his mind, said, “Exactly.  But when people travelled in this man’s taxi, they not only stayed awake, they prayed that they would survive the driving.”

The people who attended the congregation in the priest’s church on Sundays were all believers.  Nevertheless, he could not satisfy all of them.  He could not cultivate non-religious people, either, because they didn’t come to the congregation.  On the other hand, the cab driver never failed to remind his customers, including ones who had long forgotten about religion, of God by placing their lives at stake by performing reckless driving.  In this respect, the cab driver had been evaluated higher than the preacher in heaven.