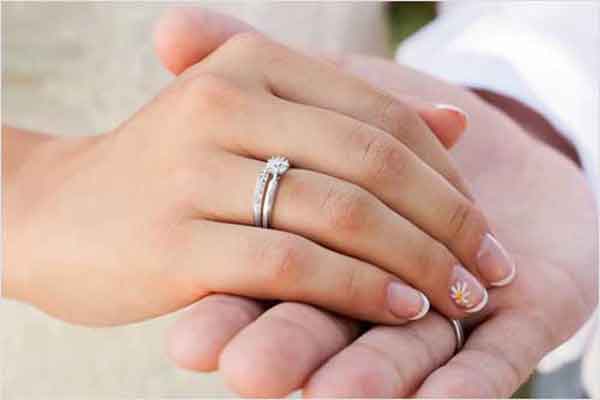 画像引用：All about Wedding Rings that You Ought to Know ? Top
http://topjewelryshoppe.com/wp-content/uploads/2017/12/beautiful-wedding-rings.jpg

Seating herself in the dentist’s chair, she pulled from her finger a wedding ring.  “I’d like to use this for filling my teeth, please,” she said.

The dentist examined the ring, and found that it was an expensive one made of heavy gold with a delicately chased design.  So, he told her that, in his opinion, it was too good to be used for a tooth filling, and he asked her if she’d rather let him use regular gold.

“I’m afraid not,” the patient said regretfully, and explained her situation.  She had, according to her, promised her first husband, before his death three years earlier, that she would always wear his wedding ring.  She was getting married again the following week, and the man she was going to marry had made her promise that she would wear his ring after the ceremony.  “This is the only way I can keep my promise to both of them,” she concluded.