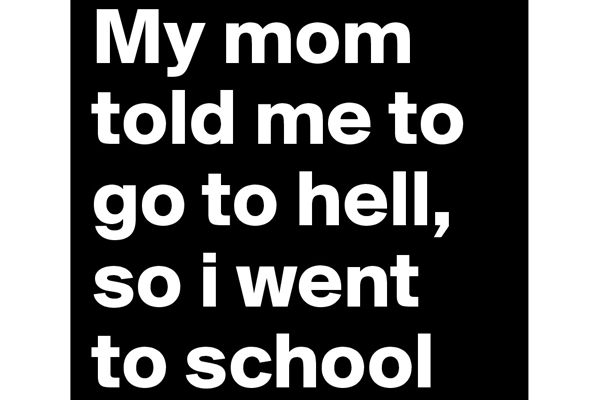 画像引用：My mom told me to go to hell, so i went to school – Post by ..
https://cdn.boldomatic.com/content/post/dEIPVA/My-mom-told-me-to-go-to-hell-so-i-went-to-school?size=800

During World War Two, two American soldiers stationed in England were standing at the bar in a pub.  An elderly, benevolent-looking gentleman caught their eyes.  One of the soldiers insisted that the man was the Archbishop of Canterbury.  The other one insisted otherwise, and, as a natural consequence, a bet of one pound was made.

Hardly had they begun asking the gentleman, “Excuse us, sir, for intruding, but would you mind telling us something.  We were wondering if you might be —“, when the gentleman roared, “Go to hell and mind your own damn business!”

Stunned, the soldiers retreated to the bar.  After a moment, one said to the other, “Isn’t that a shame!  Now we’ll never know.”  It was the one who had put the bet on the gentleman being the Archbishop.

It was obvious that the gentleman was not the Archbishop.  His behavior alone was enough to deny that he was, and his mentioning two words, hell and damn, which no clergyman, whichever rank he may be, would ever use in any circumstance, in one sentence at that, had made it totally indisputable.  But, the soldier didn’t want to accept his defeat.  His desperate thinking brought him a clue.  That was, the gentleman didn’t actually deny that he was the Archbishop of Canterbury, did he?  That meant the bet was still continuing, but there was no way to settle it after that dreadful incident.  On that feeblest ground, the soldier was desperately trying to make it a draw, and consequently, avoid the payment of one pound.