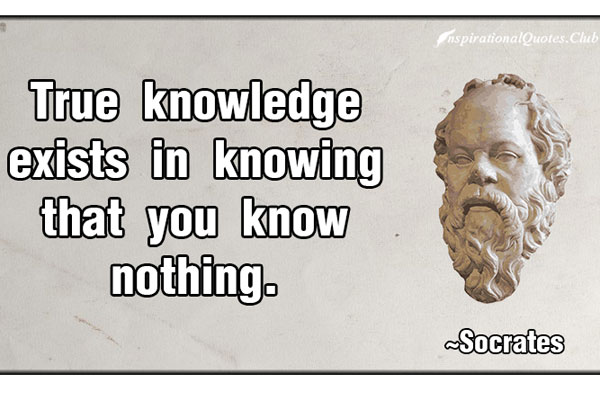 An angel appeared at a faculty meeting and told the dean, “In return for your unselfish and exemplary behavior, the Lord will reward you with your choice of infinite wealth, wisdom, or beauty.  Choose one.”

The dean the academic person chose infinite wisdom without hesitation.  “Your wish has been accepted,” said the angel and disappeared.

All heads turned to the dean, who now had come to possess infinite wisdom.  He was surrounded by a faint halo of light, but was just sitting without saying a word.  One of the colleagues, having become inpatient, prompted the dean, “Say something brilliant.”  Then the dean opined, “I should have taken the money,” and fell silent.

The dean, with infinite wisdom, had no trouble coming up with solutions of the problems from that of the reforming of the department which he had been discussing a moment earlier with his fellow colleagues without a fruitful result to the worldwide ones.  At the same time, however, he could estimate the enormous amount of cost each solution required.  The solutions produced by the infinite wisdom wouldn’t work without money, after all.  If such was the case, he should have taken infinite wealth instead of infinite wisdom.  That was what had come to his mind at first.  But then, even with infinite wealth, the problems couldn’t be solved without infinite wisdom by which the solutions would be produced, could they?  The dean was silent because those thoughts were circling around in his mind.  Forced to say something, he uttered what he was thinking at that moment, but the next moment the other thought occupied his mind and he couldn’t continue.  Which one should he have taken?  This was a problem he wouldn’t be able to solve in a million years even with his infinite wisdom.

Quote: If a man is proud of his wealth, he should not be praised until it is known how he employs it. (Socrates)