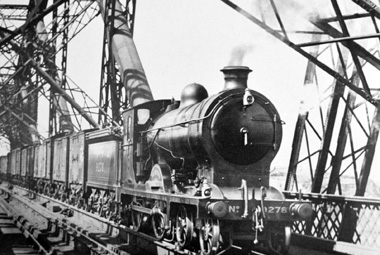 画像引用：Old photograph of a steam train crossing the Forth Railway Bridge
http://1.bp.blogspot.com/-4pu9FEHsJi4/VWXzDS1HZpI/AAAAAAACPQM/SDk_2bJ_KfE/s1600/Old%2BPhotograph%2BForth%2BRailway%2BBridge%2BScotland.jpg

A Londoner shared the train-carriage with an elderly Scot. At each stop the old man rushed out, ran down the platform, then rushed back, panting.

The Londoner, who had been observing what was repeated each time the train arrived at a station, couldn’t control his curiosity any longer, and asked the Scot what he was doing. The Scot replied, “I saw a specialist in London about my heart.  He says I might drop dead anytime; so I’m just booking from station to station.”

That man was a typical Scot. He knew that he might drop dead at some point on his way back to Scotland.  What had popped into his mind at the London station was that if it actually happened, the ticket beyond that point would be useless.  Paying for the unnecessary fare would be a waste of money, and it was the last thing he wanted to do.  The location of the point, if there was one, was not known of course, so he devised a method to pay for the fare up to that point, but not beyond it.  Any Scot in his shoes would surely have found the same method, but it was unimaginable for other nationals.

(Scots in jokes are usually depicted as the stingiest nationals in the world.)