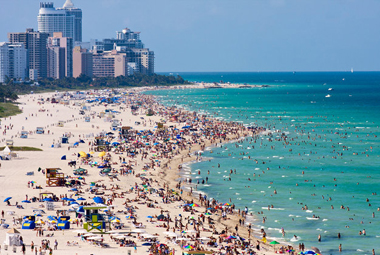 A New York retail clerk was suffering from aching feet.  His doctor attributed it to years of standing.  He advised the clerk to go to Miami and soak his feet in the ocean.

When the man got to Florida, he bought two large buckets at a hardware store, and headed for the beach.  He asked the life guard the price for two buckets of sea water.  For him, a lifelong retailer, everything was merchandise to be exchanged for money.

Unsure of whether the man was serious or kidding, the lifeguard decided to go along with him, and replied, “A dollar a bucket,” with a straight face. To his surprise, the man paid him two dollars, filled his buckets and went back to his hotel.  At his hotel room, he soaked his feet in the sea water, and found it very comfortable.  So he decided to do the same treatment that afternoon.  He went to the same beach, and handed two dollars to the same lifeguard, who accepted the money and said, “Help yourself.”

The clerk started for the water as he had in the morning, but where it had been in the morning, he saw an expanse of sand. The water had receded.  As he had never been out of New York where he worked day in and day out at his store, he had no knowledge about the tide.  The absence of the sea water meant, for him, that it had been purchased by many people.  Moreover, the life guard was sitting at the same place as he had in the morning.  He had sold that much sea water by himself in half a day just sitting there.  All those years of himself standing in his store flashed in his mind, and he admired the lucrative business the young man had established there.  Totally impressed, he turned to the lifeguard, and exclaimed, “Some business you got here!”