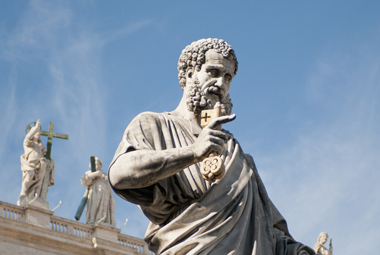 Michelangelo left this world just as the common people do when their turn comes. He was accompanied with a politician who happened to have passed away at the same time as he. He saw the Pearly Gates and St. Peter the gate keeper as he had heard of. St. Peter proclaimed, “He’s here!” and ushered the politician inside. Michelangelo followed him, but the gates slammed in his face.

Shaken, he asked St. Peter. “I have served God all my life through my work. Why is it that I am completely ignored in the midst of the tremendous welcome for, of all people, a politician?” St. Peter explained that it’s because there were many artists and religious people in heaven, but his companion was the first politician accepted in there.

Michelangelo had been convinced that the art remains eternal beyond the life, but at that moment he realized that what remains eternal was the law of supply and demand. He was respected by everyone when he was on earth, because his talent in art exceeded that of others. But there were many talented people, if no match for himself in his view, in heaven. On the other hand, the earth was full of politicians who, in his eyes, were all good only at changing what they say by observing the countenances of other people, but none of them had reached heaven until then. No wonder that his companion was being welcomed.

Even so, he thought, it’d take another thousand years for the second politician to come to heaven. The politician who just arrived wouldn’t have anyone to talk to until then. In contrast, he’d soon be talking with da Vinci and Raffaello about their past experiences. Having realized all this, he patiently waited for the door to open, now for him.